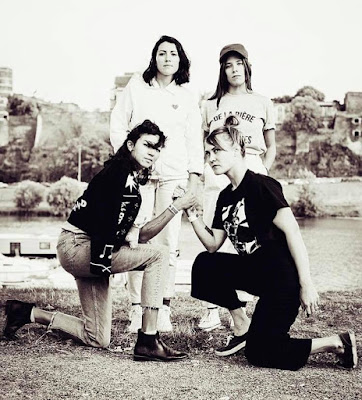 
In the beginning, there was Shana Cleveland (guitar), Marian Li Pino (drums), Lena Simon (bass), and Alice Sandahl (keyboard). La Luz was born and we discovered them in 2013 following the first releases : the Damp Face EP then the full-length album It’s Alive. At the time, we’ve been pleasantly seduced by the sweet and classy surf rock music played by the American quartet. (see Mixtape WOL).

Then came the end of the 2015 summer. Their second album, Weirdo Shrine, produced by Ty Segall, unveiled some darker-faced, wild and mystical vibes. The melodies were becoming heady, as well as the vocal harmonies – where the riffs and captivating rhythmics were enchanting. From now on, it was clear that these girls were showing us the way. Let there be light.

Their wonderful last album, Floating Features, popped up in May 2018 . It was not expected, but it was perfectly timed. Just before summer. And it really carried us the last month. We strongly recommend this album, a “must have” to be honest. Every song is beautiful, powerful, magic, warm… What more can we say other than, thanks girls! You are one hell of a rock band.

With a lovely view of Hamburg’s harbour, we met the American girls to have a chat before their concert at Hafenklang. (4/10/2018).

x The first line up of La Luz was included only Shana and Marian, if I’m right. How did everyone find each other?

Shana : Yeah and 2 different girls. Before that, me and Marian played in a band together, The Curious Mystery.
I was kind of tired with it and I had this idea, “Hey I wanna form a band that has like four female vocals” so I asked Marian if she wanted to be in it and play drums and she said yes. We had the two of us then she recommended Alice because they had played together in a band but then Alice kind of blew us off… So we went first with this other keyboard player. Then Alice finally joined so it came through at the end! Then the former bass player wanted to do other stuff after couple of years, so Lena joined.


x Could you please tell us about your first encounter with music?

Shana : My parents were musicians, so just through hearing their band was my first encounter with music. They played together in different bands when I was born. They’re still playing in different bands… like my dad plays in 10 bands or something. He lives in Michigan, that’s where I grew up and my mom lives in Seattle.

Marian: My parents were not in bands or anything so for me it was just through education. Like in school, they introduced you to music, you just pick an instrument and I picked clarinette. I discovered and learned to play music that way, classically and then jazz, then rock and roll…

Lena: Same for me. But my first memory was being on the floor, I guess as a really young child, listening to Peter and the Wolf, like the story and the music. My dad was just playing that. It’s actually really cool, I loved it.

Marian : I also remember when my parents got me my first drum kit for Christmas. At first they put out only the snare drum and I was already elated, just by that one piece, like “oh my god, this is the coolest thing, this is the best christmas present of all time! “. And they had actually combined with the rest of my extended family to get the whole drum kit, I was literally out of my mind!

Alice : I remember my mom playing the piano a lot, and it intrigued me. Then I wrote my first song very young before I even knew how to play… It was about cat (laughs), but it was like very boring. And my dad played guitar, he was really into this folk musician Gordon Lightfoot so I would just sing along with him… so now I really love Gordon Lightfoot. 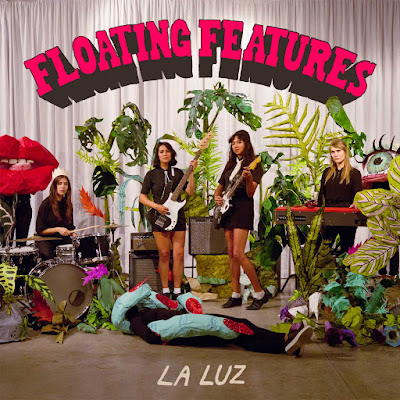 x About the last album, Floating Features, what does ‘Features’ really mean?

M : Feature is like your nose is a feature, your eyes, it doesn’t have to be on a face, it’s more little details…
S : It’s also something that people use to describe films, like a feature film so it has a lot of meanings.
I think of it as a psychedelic kind of way that dreams and movies can be. They can be close to reality and also just a little bit off. I feel like that’s a sort of a recurring theme from the album.


x Then, where do these Floating Features come from?

S: From your mind!
I have had a lot of dreams where my mouth gets really big for some reason…
But the features on the cover were sort of a happy accident. We had this idea to make sort of a set for the cover of the album and also for the Mean Dream video. We thought maybe it would have plants, just sort of look like a beast in reality but being a little off and strange and with a performance…
And actually my friend Lauren Corden already had made these giant features so it was perfect and tied in the title, even more than the original idea…

x Your music always evokes the natural world to me, like in a mystical way, do you know where that comes from?

S: Do you mean the kind of imagery in the lyrics?
As I wrote half of those lyrics in the country actually, in California, in a small town. I’ve always liked going to parks to write lyrics, I don’t know why. I think that there is something about the white noise of nature and that it’s less intimidating to come up with words in a place where there is sort of noise than in a silent room... Sometimes it’s even nicer to go to the ocean or to the river, some place that is naturally loud and so you can just sing into the air. It’s less claustrophobic… I feel it’s easier for my mind to wander – when it is not so confined…


x Reminds me of Seattle – where you’re from originally, before moving to LA. It’s completely surrounded by nature isn’t it?

S : Yeah, parks, mountains, it’s beautiful nature.
M: Everywhere there is a forest or a lake or a river... You almost can’t escape nature, it’s there all the time…

S: Yeah. The first time I went to the Northwest (Pacific Northwest, Seattle etc.), I was moving up there from LA. I stopped at a rest area but it was just so beautiful, I couldn’t even believe it, it looked like “Hobbit land” (the Shire). The trees were covered with moss and that’s totally normal in the Northwest but I’d never seen anything like that before… I was like “Holy shit, this is like a magical Jungle”, it does feel really magical – sort of dark and lush and green…


x Is it important for you to live close to nature?

All: Sure….
M: That’s kind of how the US feels to me, there is always nature or any coast by… Maybe every country is like that…
S: When I lived in Chicago, I felt like there was no escape.
M: I guess NYC feels like that too.
L: But you can go to the beach though…
S: But it’s like a city beach…


x Shana, I read that you were drawing comics, do you still have time for that? And is there a link with your music?

S: Yeah a little bit, not as much as I’d like too… it’s pretty hard... Comics are hard. I wanted to do a comic for The Creature, like our song The Creature. I started one but I never finished…
About the link, it is sort of vague. The magic of media made much more made of it than actually existed. There is this comic, “Black Hole” from Charles Burns, which is based in Seattle and a lot of the action takes place in this park that was right next to where I used to live, and had some really of strange experiences. So yeah, I just think it asserted the feeling of that comic in the previous album Weirdo Shrine..

S: It’s just great when you have a great show and when you make a connection. That doesn’t always happen but that happens a lot. Some nights, people are not really engaging – you’re gonna have the worst show…
I don’t know if people realize that necessarily, but they have a lot of power in what kind of performance it’s gonna be. And we give more, the more we get from the audience.
It’s always sort of a gamble. You don’t know what kind of night it’s gonna be. Then sometimes this magic thing happens, when it feels like we are all, everyone in the room is going to the same thing together. There is just a connection. For me that’s what I like the most about it. When there is this magical understanding taking place through the power and the beauty of music…

M: We are playing mostly the same songs every night and every day can feel vastly different. One night can be, they didn’t care or I didn’t care, and it wasn’t a good show or it can be “Wow, that was so much fun”, they were dancing, we were dancing, everyone is smiling…

L: You see them laughing and smiling and singing and it makes all the difference… Ok this is worth it now! Like some adrenaline I’m sure. There was one of our shows in this tour where I felt like that, it was either in Copenhagen or Paris and the audience made me really happy. I felt warm inside.

x Actually I was asking myself, do you sleep well during a tour?

M: Actually yes! I was just talking about that this morning. I tend to sleep very well on tour.

x And do you dream?

M: Sometimes… They say that changing where you are everyday helps you to dream… But I have no control over my dreams.

S: I remember my dream of last night… You want me to tell...? (laughs)
I just dreamed I went out for a hamburger with my grandma…. It never got to the eating but we were going out to eat an hamburger…

x Then you arrived in Hamburg...

S: Yeah that’s true! Have you guys got a lot of good hamburgers here?


x Before you go to dinner, could you give us some playlist tips? What did you listen during the tour for example?

Shana: Dig in the Cutworms album!

Lena : I just put on one of the latest Deerhunter album, from 2013 (Monomaniac). I hadn’t really ever dived into it and there were some cool tracks. It’s the one where it kind of go back and forth between this fuzzy garage and more bedroom electronic sounds. It’s cool.

Alice: I have a lot of music in my phone, but I’ve been listening to Erykah Badu’s latest mixtape, I really like it, it’s really good… It’s not even that recent… 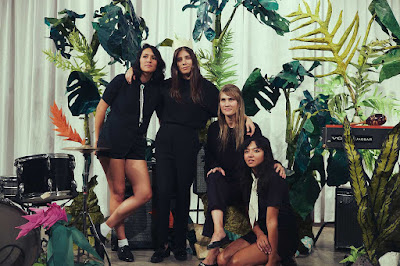 That night, the show definitely made us feel warm inside. A lot of passion, nice riffs, nice people, a great harmony where the girls made us dance and sing.

La Luz were also supported by a really cool english band: Peggie Sue.
To be continued…
Check out our interview related playlist here: