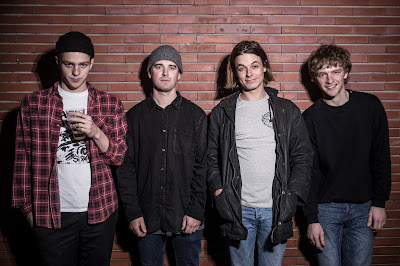 
By making a pun with Australia’s nickname for this interview title, I realized that it’s actually my land of Oz. A land far away, where I’ve never been, a bit mysterious, but definitely deep-rooted in my musical universe.
We almost forgot about this, but the first Foggy interview, 8 years ago, already brought us in Melbourne, to the late Crayon Fields. Since then, many Aussies went through our ears, and we’d dream about talking about all the good bands from there, but it would be way too long...

The sensitive and magical journey, will this time, tell about The Living Eyes. We met them musically some years ago now, as these kids have already accomplished a lot.
Moving around the bountiful Melbourne scene, precisely in Geelong, they can be considered as worthy successor of cult bands such as Eddy Current Suppression Ring, Ooga Boogas and co… in some different projects or labels, but all linked with the same passion. Just take some time to dig in their corner stone, the label Anti Fade Records, from which you can discover some of the best australian rock and roll (New Centre of the Universe Vol 1 and 2 compilations for example) .

The Living Eyes just released their third LP, Modern Living (thanks to Anti Fade, Neck Chop, and buddies from Gone With The Weed for Europe).
It starts with “Better Think Again”, and actually you’d better think twice before pushing play, or you’ll be suddenly grabbed and hurled in a huge electric whirlwind of adrenaline combined with enraged anthem and riff. We could easily list every song, as there is nothing to waste: Hits such as Spring, I Don't Think for Myself, getting into the rush of Horseplay to some more introspective vibes on Fear of Heights… you can't help, you just listen very loud and with risen fist. This is an epic feast rolling on magnetic fuzz brilliantly carried out at full speed by young Guitar HerOz outlaws.


We can already predict that Modern Living will become as cult as we consider its predecessor, the red “Living Large” released in 2015 and the yellow one released in 2013. For those who missed out, just go and listen to all of these classics : Down And Out, Up And At Them, Ways To Make A Living, Cry In Shame, High Standards, Eat It Up, Lighten Up etc…
These guys represent the pure rock and roll, thanks for that because it makes you feel extremely good.

As you may have noticed, we have been waiting to see them for some time, but they had to cross the earth to visit the old continent. We had the chance to meet them during their Euro Tour (crazy gigs in Rennes and Paris) and to talk a bit with Billy Gardner, the singer / guitarist (who’s also playing with Ausmuteants ).


x The name Living Eyes, is it referring to the Bee Gees song or to the Radio Birdman album?

Neither, it’s 13th Floor Elevators reference. They used to play in a club in Texas called The Living Eyes. We were garage kids!


x Can you tell some words about Geelong ?

It’s an area close to Melbourne like near the beach and I don’t know, it’s a fun place to live. 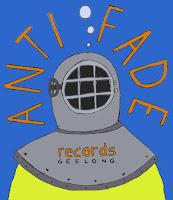 Anti Fade is basically, mostly, just me releasing my friends so that’s why all the bands are from Geelong. A lot of good bands in Geelong!


x It’s funny because when you listen to the first releases from the bands on Anti Fade, like you, but also Hierophant, Ausmuteants, Bonniwells etc. you really feel this 60’s garage vibe, that shades off gradually to some more specific and different sounds in each project evolution…

That’s what we were going for. Like I said we were garage kids and as we get older we listened to more rock and roll I guess instead. Our music taste has broadened, we are more open minded now.
We went to school with The Frowning Clouds, they’re like 2 years older than us, and shared a lot of music like garage especially. Frowning Clouds got us into it and there was a bit of a garage scene in Geelong in like 2010-12 or something or even earlier.


x What other kind of music do you listen to ?

Lately I was listening to a lot of Roxy Music, but also Metallica. The first 2 albums, I love. They’re great! And even to a lot of hardcore lately. In the van it’s been nice to listen to a lot of Neil Young. Mostly rock and roll.


x Could you tell a bit about the “previous generation” that we are also fond of: the Aarght Records stuff, Eddy Current Suppression Ring, like Mikey Young who mixed your album, Ooga Boogas etc...?

Yes Mikey, Mix Master Mike! He has his name on pretty much 80% of Australian releases and he just knows what he’s doing. He has a great ear for that.
He lives like across the bay, from Geelong. So you can catch the ferry to his house or you can drive around but it takes longer.
But yeah we took the ferry over his house in the end of last year and mixed the album with him and it was good. He’s a lovely guy and all the music he makes it amazing.

Like I think Total Control is the best band at the moment or these days. Best band in Australia of the 21th century!
Ooga Boogas are amazing, Stacky the singer is the funniest guy ever and he’s got some funny lyrics too.

x The Living Eyes released 3 album for now : could you describe each?


- The red one is a bit more like Straight Arrows or something maybe.


x What about the cover ? Some people on the phone…

Yes that was done by our friend Paris. It was her idea, we gave her the title “Modern Living”, she did a couple things and we said we like that one.
And yes everyone is turned on their phone nowadays, myself included…
She also playing in Hierophants and she has a new band called Parsnip who are going to take over the world! They’re the best, it is 4 girls and it’s very good. If you haven’t heard it, I recommend you to listen to it!

We’ve known them for years, they are from half an hour from Geelong.
They are a hard working band. They kind of made guitar music cool again. A few years ago I swear like no one who’d go to shows of stuff like that. But I feel since King Gizzard have started, lots of young kids are getting into the guitar music and not just top 40 crap.
King Gizzard are doing crazy things…

x Living Eyes is definitely a guitar band, what do you think when you play?

I don’t know, I wanna rock!


x So you make music for what? is it like a personal pleasure? or shared?

For fun. It’s definitely a personal pleasure. When I don’t make music for a while, I start to feel a bit odd. And then when I make songs, it feels good. It feels healthy.


x Are you working besides music?

Yes of course. I’m working in a Tshirt shop with my friend Jakes from Ausmuteants. That’s good working with buddies, it makes a big difference. You gotta have the buddies!

Big thanks to the lovely Living Eyes for their time to Gone With The Weed and Raw Journey.

For the diggers, we recommend you to check on these other australian bands :