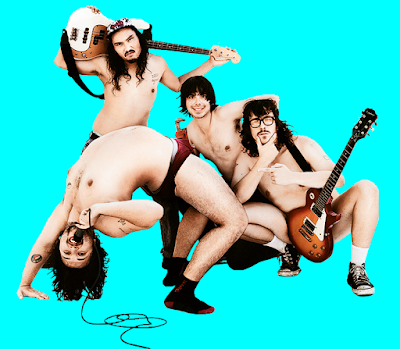 
White Fang is a band of buddies based in Los Angeles, where the action is right now.
Behind their freaky look, Rikky, Funkle, Jimmy and Izak, are concealing a fascinating artistic frenzy, for which we’ll probably never grasp the limits.
Indeed White Fang, which already released many brilliant records, is only one side of their numerous activities and projects.

At the core, stands Gnar Tapes. This cassette label they created together is kind of a laboratory of all their craziness. We could sum up their work as an absolute pop way of thinking. Each member has one or several projects: White Fang for the fat and explosive retarded rock and roll, The Memories, for the love songs which go straight to the heart, Free Weed, Rikky’s incarnation and his dancy rhymes about sex and smoke, Unkle Funkle and his unclassifiable dance music, Jerry Rogers and his touching lo-fi pop, Skinny Jesus and his screwy trap music etc…. All of that is gathered on the recurrent theme: partying, having good time, smoke as much as weed as possible.

It maybe sounds like a cliché but that how it is. These west coast dadaists, are true and uncompromising, with one motivation only : playing good music, have fun and make stunning shows.

Because who never saw White Fang live, will never understand. As some gloominess foes, super performers, they bring every time the audience in their hilarious and absurd deliriums, most of which happen half naked, and bang their hits full speed (Bud Light, Bong Rip, Bad Boy …), and it definitely works! This is a pure american entertainment they handle so perfectly, that it's fascinating.
Especially as they have a gift for songwriting. Anywhere they will go, we’ll follow.


We met them before their hamburger show for which they shocked the Molotow. Actually it was pretty obvious when you had a look at their tour rider requests: HOSPITALITY RIDER WEED BOOZE SNACKS TOBACCO SOCKS UNDERWEAR TOWELS WATER CANDY CONDOMS TOYS/GAMES DRUGS

We also thank the great locals Dolphin Lovers who prepared the audience before the storm and Wild Wax Show for putting up this great show.

For information, White Fang is currently touring Europe, so don’t miss them! And their last album, « Chunks » came out few months ago via Burger Records.

Rikky : Yes, this is our third time here, the second for White Fang, and we’ve been there last year with The Memories.

I’m anticipating : having a lot of sex, that’s one of my main goals, meeting ladies, trying to stay stone, as best as I can, even though in a lot of places we’re going to, it’s gonna be pretty hard for that. And first and for most, spanking ass on stage every night and getting that crowd look at the Fangs and say « What the fuck is that thing ! ».


x You’re all from Portland ?

R : Yes, we all grew up together there, from when we were little kids then we all moved together in LA two and a half year ago.
Portland was changing, getting more expensive, and the other thing is we were 25 years old, still in our hometown. We got out at the right time, everything was getting really good. It was a bit like playing the poker game, alright, we won, we’re out!
We said let’s go to a big city, it’s gonna be bullshit everywhere. But somewhere where we could smoke weed and chill, so not like NYC, where everything is expensive.
In LA, we are not too far from home, our friends Burger Records are there… And also, we were coming to LA every month to play, we were never playing in Portland, so had to go to LA it’s like 15 hours to get money to pay the rent, we were like “Why don’t we just move there?”.

Finally, Bobby Harlow (The Go) was opening his recording studio, Studio B and he wanted to record White Fang… Then Bobby moved and we took the studio, which is now Studio G, and this is where we live and all work together. We were borderline homeless when we moved there, we were having sex with these girls that let us stay at their house basically.


x So you recorded your last album, Chunks with Bobby Harlow (from cults The Go):

R : Yes it was Bobby’s idea, we’re proud of that. The next one will be probably produced by him too even though if he’d read that he’ll say « What are you talking about ? ».
But I’m pretty sure he’ll do it! We’ll probably do a whole demo version first and then if he doesn’t produce it, we’ll get like much bigger, like Butch Vig. « Butch listen up man, The Fangs want you to do the job, let’s do this, either you or Bobby. »


x As a lot of your releases, it was put by Burger Records, with whom you are close to?

R : We knew them for a while, through our label Gnar Tapes, so that was the connection. Plus they got interested in our bands The Memories, Unkle Funkle, White Fang, Free Weed, and put out tapes of that.
It really brought us so many fans, like when we came to do shows, all the kids who love Burger Records, they got to know our bands.
We became friends over the years, then after we moved at the studio, we had this building and were like, « I wanna do a store, do you guys wanna do a store ? » They were like, « Wow that’s crazy, another store, it’s a lot of work, do you guys know where you get yourselves into ? » We were like, not really, but pretty much. »
Now it's been almost a year that the Gnar Burger is open every day. 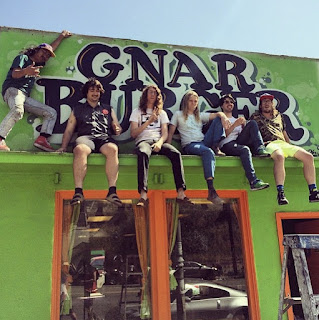 R : Yes. And our neighborhood is fucking where everybody lives. Like our merch guy, Davy, lives with Danny from Together Pangea, also with Lukas who plays in The Memories. I use their shower because I don’t have any in the studio…
And within 2,3 miles, you got a lot of bands living, The Growlers, Cosmonauts, Peach Kelli Pop, No Parents, Ty Segall, King Tuff, Stone Throw Records, Ariel Pink, a lot of LA artists…


x A lot of artists from San Francisco moved there too.

R : Yes like Ty, John Dwyer. John Dwyer is really cool, he likes us a lot. He heard Unkle Funkle first and he immediately understood all the Ween and Frank Zappa vibe we love, he got it.
Because like him, we write a lot of music, we write songs, pop songs and all kind of songs… He’s been really cool. Our friend Dan Rincon (Apache, Personal and the Pizzas…) actually plays drums for Thee Oh Sees now…


x Do you consider it as kind of a new artistic place there ? All these former DIY artists living in the same neighborhood ? Like a bunch of friends ?

R : A lot of people are friends but it is also more like everybody is working on their stuff. Everybody kind of knows each other or recognizes each other. If you do something we’d say that’s cool you’re doing something, I’ll come watch you, or you’ll come watch me. Everybody’s not friend but they respect each other doing. It’s like work, not a question of love or friendship but not competition either. It’s a good vibe, pretty much like a party. Everybody is doing their thing.
Also a lot of people want to make it in LA, like get rich and famous. I don’t really care to be rich and famous but at the same time, I’m not playing music just to not have money.

We were at a party where Burger Records put the bands so a lot of friends of ours, and there were Lady Gaga, Justin Bieber, Lenny Kravitz... I’m not at the same level as them but they were right there. So you have this thing there, all that is happening around you, nobody is at the same level, but you see everybody, it is interesting.

Jimmy: The success is also a part of it (in LA), like people are proud if you succeed. If you do something good, people are like, oh yeah you did it.

R: : In Portland they don’t want you to succeed, they just want you to be DIY, or PC (politically correct). “Don’t say faggot, why do you say that, you are not joking, you can’t joke about that, there are rules about things you can’t just joke…”

Funkle: This is more or less like that everywhere, in Portland, it is more in the music scene.

R: A lot think that our esthetic is disrespecting but its freedom of choice. I haven’t really cared about punk rock in a long time even though we play in I guess a punk rock band but punk rock now is so much just like all rules. It’s like “fuck the fascists and nazis” but they thinks like fascists because for them it has to be this way and if you don’t do it, then you’re wrong and you’re the bad. It’s the same way of thinking but the characters are different.


x Do you miss Portland anyway ?

F: I miss the weather and the nature.

The second part of the interview is here : White Fang - The Bong Interview Bong Part 2.