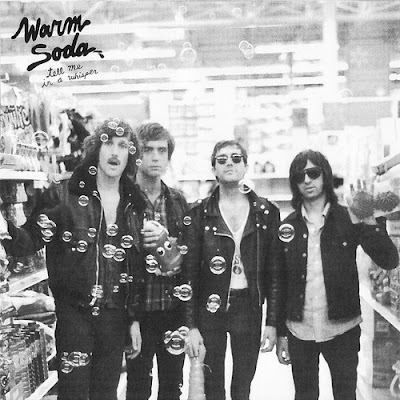 
Behind Warm Soda, the prolific West Coast resident and coolest moustached man around, Matthew Melton is pulling the strings, from his Castle Face Records member chair (Thee Oh Sees, White Fence, Ty Segall, The Mallard, Fresh & Onlys etc…). As we know, this San Francisco scene is much too often mixed up with the « new garage generation », but taking a closer look might reveal an unsuspected load of different musical styles, matching logically the tremendous amount of bands of the area, with to each its unique personality.

Melton’s talent, and he’s full of it, lies in the ability to write songs with irresistible melodies, carried and enlightened by a devastating art and sense of the riff. This delicious recipe takes him on a rock and roll, power pop and glam sauce, supported by a hilarious “Rock and Roll High Schoolesque” aesthetics as you can see in the video clips or material of all his projects.

To quickly locate where his career’s at, the resourceful young man already came out with, among various singles or EP’s, a LP with Snake Flowers 2 (2008), 4 with Bare Wires (2009 - 2012), a solo album (2010) and another one with his last band, Warm Soda and their brilliant “Someone for you”, released this year on Castle Face Records.

It was an honor to get to meet him for the first edition of the Parisian City Sound Festival - San Francisco Edition which took place at Le 104 on the 19th and 20th of July. Warm Soda’s performance was a perfectly great and a true fulfilling moment for which we are grateful.
It’s with kindness that Matthew Melton accepted to answer to our questions… 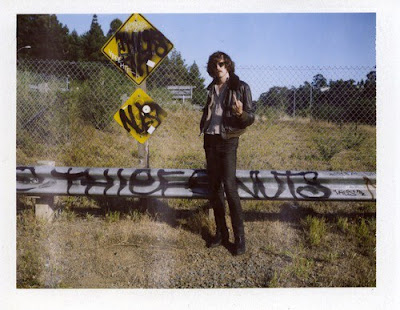 x We’re at the City Sound Festival - San Francisco Edition so could you talk about when you first met with John Dwyer (Thee Oh Sees / Castle Face Records)?

Matthew Melton : Let me think when that was… My first band in San Francisco was called Snake Flower 2 and we played a show with Thee Oh Sees and Jay Reatard, it was like in the first year when I moved there. And then a couple of years later when I had Bare Wires going, we played a couple of shows and started to work together. John Dwyer is awesome, awesome guy. He’s definitely up here in San Francisco’s music scene.

x Could you tell about the passing between Bare Wires and Warm Soda?

MM: Well, we were on tour in the US and our drummer overdosed on drugs and it was really kind of a bad scene. He was in the hospital in poor condition and so we traveled back. I actually left the bass player in Austin, Texas, and dropped him (our drummer) off at his mom’s house In El Paso and I drove back to San Francisco.
And then I just decided I wanted to make a shift in the type of music I was making so I just decided to erase everything and start from the beginning, over again.
That gave me a fresh perspective and a kind of different angle and I’m really glad that I made the transition.

MM: That’s a good question! I’m not really sure if that would ever happen. I wouldn’t be opposed to it, perhaps in the future. But I don’t know, I think I really prefer just moving forward and leaving behind songs more just like evidence instead of always repeating your past, ideas.
For instance we’re already half way complete with the new Warm Soda album.
So we’re working on this and just moving forward. It’s gonna be released in the fall with Castle Face Records and I’ve also got a new solo album ready with 24 songs… To dig back just feels like moving to the wrong direction.

x Let’s talk about Fuzz City, what is it exactly?

MM: Yeah, sure. I traveled around a lot so I’m sort of a vagabond because actually I currently don’t have a home or apartment in any city. But I’ve got this recording studio in Oakland.

At the very first start, I was based in San Francisco. But that was just an 8 track reel-to-reel analog recorder, just in my van. And I was just pulling up to somebody’s house and record them like that. Or we were recording in like the kitchen or in the bathroom, all this kind of crazy places, which was also really cool!

We started the studio and the label Fuzz City Records in 2012 so it’s brand new. We’ve been in Oakland for like a year and a half.
We’ve released a few things on the label but right now, our focus is on the studio because that’s just what it seems to be the most important.
We’re working with bands, like having a band coming and feeling comfortable so they can create in the right environment and go for a certain specific kind of sound or we do also mastering.
I love producing music and just make it sounds and I’m genuinely pleased by the process of creating. That’s keeping me busy lately.

But I don’t know where I go… I could move Fuzz City to anywhere! The cool thing about Oakland and San Francisco is that there are a lot of bands to work with.
But then I have to ask myself the question: why not operate it in… Berlin? in London?… Why not has it to be in a different city every two years?
I’m kind of trying to figure it out like whether I should plant roots or not? When you stay moving, it keeps things interesting, it keeps the life fresh. I’ve been to a lot of places and I don’t know where I would really like to call home yet. I feel I got to see even more, of the world… At least for now I’m still in motion!

x Is there a specific sound philosophy with Fuzz City then?

MM: I definitely think everything should hit the analog tape. It’s a big part of the sound. We use pretty small tape, quarter inch tape that makes a very distinct sound.
We use also a lot of vintage microphones so it has a very sincere sound and we’re not using a lot of digital trickery. We could record and bounced it digitally then bounced it back on the tape. So it has some kind of a finite compressed sound. I think that’s the Fuzz City Sound. It’s like tape saturated, compressed, very finite, definitely in the mid-fi range. So it sounds good, you can hear a lot of dynamics going on but it has got a lot of character too.

x Is the vinyl format important at the end of the process?

MM: I definitely think vinyl is the best format for music. Just simply because of the sound quality and it’s going to last in terms of archival (way). The CD can get scratched in two weeks, digital can be erased, or the power goes out and you have no digital.


x Do you distrust digital stuff?

Nowadays, especially because of iPhones, and with the internet which has become such a focus of culture. Everything is digitized… It’s such a bad thing because it almost forces people to live in the past because everything they see on their iPhone is a record of something that has already occurred. So you’re looking at the past and you’re missing the present which is happening out here.

x Most of the time your songs talk about love, like in a romantic and teenage way (in a naïve and touching meaning)… Do you have a special point of view about that ?

MM: That’s a good question! I usually will write a song not about a specific situation that I’ve had or a specific person but more about a feeling that I felt.
I’ll take this feeling and in order to express it, I’ll imagine that feeling through the eyes of a different character. So I like to make sort of a personify character. I’ll actually invent a type of person or a certain type of feeling or and then sing from this perspective.
I just get this intense feeling and try to make a really genuine expression of it and make sure that it’s very sincere at the risk of maybe sounding like “a cheesy love song”… But that’s a risk I’m willing to take.


x Did you finally find love?

MM: Well, I’m a different kind of person. I’m somebody who sort of has an inability to love and that comes from probably a variety of reasons, including having my heart broken at a very young age, among other things… But I feel like, that is a really good place to come from as a songwriter because I feel that if you find love, you’re not gonna have much interest in writing songs because the intensity will be gone, the tension will be gone. You don’t have that lack that can drive you to make music.


x I read that you were proud to have been in Europe (your parents never been). Today you’re coming back, what is your thinking about here?

MM: Actually my family was from a small town called Melton Mowbray in the UK and they settled in West Memphis, Arkansas, close to the Tennessee in the 1900’s. Since then, they’ve just been really simple people and no one has never really traveled anywhere or done anything. Although there were a lot of musicians in the family so that was one goal for me. I’m the last man in the family line so it will end or begin again with me so I kind of wanted to go out into the world… And I actually met some people last night in London from Melton Mowbray and we had a really interesting connection here between those people…
But yeah, it has always been my dream to travel the world with my songs and I worked really hard to get to this point and I’m gonna just keep going for throttle!


x Any Warm Soda you can advise?

MM: I actually am someone who is concerned with being healthy and I don’t drink soda…
Mainly because it contains high fructose corn syrup which is an awful chemical man made sugar which is very difficult for the human body to process.

x So you drink water?

MM: I drink water, water is awesome. The human body is 70 to 80% of water so it makes sense to keep that flowing into yourself.

B.
Thanks to Ju and Clarisse Vallée