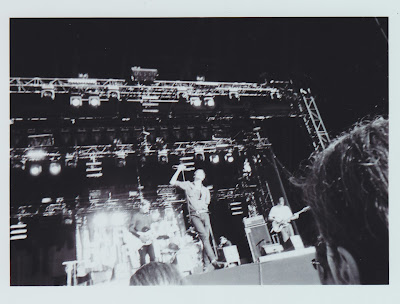 
Iceage sustain the mystery, that's for sure.
Outsiders of La Route du Rock 2013 edition, they stood in for new yorkers DIIV who had cancelled their european tour a few months back.
If those are undeniably good, I was thrilled that the danish were coming, even though our first meeting after the show, was a bit frosty.
Given the amount of good and bad stress these guys must endure, you understand their attitude. Some will mistake it for arrogance, I think it might be suspicion, considering how they started and the controversy that their provoking symbolism set off.
We will spare you the details of the press conference which was not really worthy of interest.


Foggy Girls Club's short story being closely related to Iceage, it is interesting to look back at the past few years.
My first contact with the band dates back to 2011, after their 1st LP "New Brigade" came out, thanks to the late webzine Altered Zones and a bunch of articles mentioning a brand new Northern wind.
"New Brigade", frontal impact, adrenaline explosion… Who are these savages? What do they want? How do I get another fix?

Then came Escho and Tambourhinoceros, two Copenhagen-based labels who took charge of the youngsters. What happened next was simple : I ordered the LP, it came in a pizza box, we exchanged a few e-mails and I've kept, ever since, a warm connection with these people -and this town- who have allowed me to discover this thriving danish scene they stand up for (Thulebasen, CTM, Lower, New Spring, etc…). 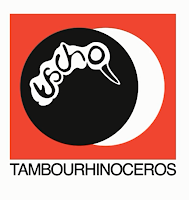 The Escho/Iceage relationship is strong and definitive :
”They were there from the start when we were kind of useless. They held us to get something done. We knew these guys way way before we did music in a more serious constellation. So basically they’re just friends and at one point they just put it out. And if it wasn’t for Escho I think we wouldn’t be as much as active and playing as much as we are. They definitely make sure that we don’t just sit on our asses… “

Posh Isolation is also worth mentioning as another pioneer Copenhagen label, who put out their tape : “Posh Isolation is a mainly industrial music label but they also product punk and weird stuff from Copenhagen scene. So they also help young boys that does something in rehearsal room to make it exist I guess.


To sum up, here's a bunch of young danish guys who started a band, released an album and caused a ripple : a modern punk classic that became a favorite on many record players.

Of course, things shook up and they aroused a lot of interest. They're pretty straightforward about it :
“We had a bunch of possibilities but they all seemed to be quite horrible. Matador seemed to be the more honest out there. And we signed with them and later maybe found out that it wasn’t the case anyway, but now we’re stuck with them.”
This honesty and sharp opinion on such a cult label (and big machine) as Matador, stand out from the usual bullshit, like some kind of conscious innocence proudly and firmly bearing their vision of art.
“About large label, it’s not that it’s horrible but it’s just that we, as individuals, have differences with them, it’s like misconception about how you should get people to listen to your music. (…). We’re interested in reaching a broader audience (…) but it’s like everything has a dollar sign at the end. So it doesn’t really make sense for us.”


Now on to the music. Their second album, "You're Nothing" came out early this year and notably affirmed that our friends were not just a flash in the pan but a genuine black diamond. Joyful in a half-light, it proves to be extremely inspiring. It leaves you disorientated, faced with something great. The piercing compositions and sharp lyrics, carried by a sometimes furious, sometimes moving chant, evoke flashes of heartache and frustration you'd just want to blow up with great spirit and revenge.
To dig up old feelings buried deep within, one of the greatest albums of the year.


But let's get back to the Fort de Saint-Père in Saint Malo. On this 15th of August 2013, the sun is looking over as we are walking to the big stage. The young danish are about to open the festival, following Jacco Gardner's lulling melodies.
Dressed in black, they are quietly setting up to start their fierce performance. Not being very famous in France, and having played almost only in Paris, it might be a little difficult to win over the breton crowd, nonetheless present despite the early hour.
Nevermind. "Awake", the vampires surely are and their battle against sunlight is starting.
They are spitting it out and the scorching heat, hitting full face, will not stop them.
Angel-faced Elias Bender Rønnenfelt has tremendous charisma. In a perpetual inner struggle, he weaves in and out of his band's sonic shots to lighten them up with his occult, fascinating flame. 45 minutes of rage and they're gone. It was good, it was strong.

“I imagine that this is how it would feel to drown in light.”- Count Me In – Sexdrome cover (New Brigade 2011) 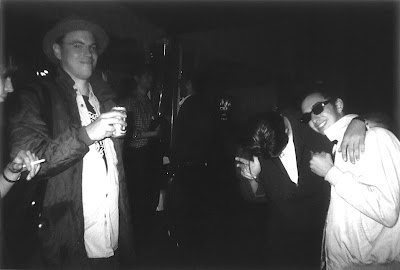 I then reach to their manager/papa bear, Nis. Half of Escho and a Copenhagen music activist, I've met him before, via his excellent band Thulebasen.

Hours and drinks go by in a nice and hearty atmosphere, unlike the beginnings. We talk about everything, from travel to food, Aqua, the nazi dude in Ace of Base etc… I keep teasing Nis about the next Thulebasen album. It's a mystery, him being busy enough recording his friends, it's hard to find the time to complete his own project.

To get back to Iceage, it's a group of honest young people and that you can't take away from them. They're a little abashed at the media circus around them. They know where they came from and what they want. For sure, their songs have carried us away and will carry us again for a long time to their northern parts, no matter the destination, only the journey is important as long as they are the soundtrack.

On my way back, I think about "New Brigade" that still gives me the chills.