We were really expecting something from The Soft Moon’s performance and they finally took the prize for this 2012 summer edition of la Route du Rock festival. It was a brutal, tribal and industrial show where their usual video projections were replaced (for technical reasons) by a sharp and hypnotizing black and white lightshow. We were definitely captured.
We already knew them via their previous releases, self titled LP in 2010 and the Total Decay EP in 2011 on their label Captured Tracks. For the ones who don’t know yet, we can say that their music is dark and sometimes instrumental or led by far-off shouts. The atmosphere can be oppressive but also warm and the rhythm is completely obsessive. They come from San Francisco and for this gig, they crossed the ocean and came to Brittany for the week-end.

We got a rendez-vous with Luis Vasquez, the man behind the moon, the day after their performance. It took place at the Fort Saint Père, under a stuffy heat. Luis is a very nice guy, the antithesis of what we could have thought after seeing their insanity on stage. We talked about everything and nothing and about what surrounds his music…

« We fucked up the last song, maybe no one noticed. That’s why I like to play at 1 am when everybody is drunk and me too (laughs)…

Their new album comes out on the 30th of October and will surely be great. They will be back in France in November for their European tour so hurry up and get your tickets! 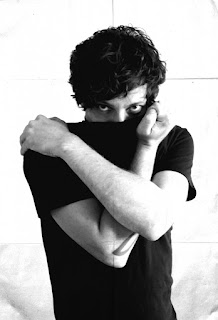 x Do you have specific cinematographic influences ?

Luis: Filmaker-wise I’d say, David Cronenberg, with that movie “The Fly” and then also, Gaspar Noé. I feel like I would like to work with them actually. These are pretty influential directors for me. For Gaspar Noé, visually and sonically, what his films, and the scores have been… I definitely take use from that in my music and then Cronenberg, I’m influenced by him because his movies are about body horror, and it makes you feel really uncomfortable.

And my music is all about me being very uncomfortable with my body, the anatomy and biology. So the sounds are trying to recreate, mimic, agony or thoughts about how my throat works… It freaks me out! I suffered from a little bit of anxiety, so that’s why there is a lot of fast pace, and very anxious, and it can scare a little bit.

x And dancing too

L: Yeah, I think it’s important to dance to music. Dance music in general because it’s kind of primal in a way, like tribes when they call gods or when they communicate, they dance.

L: Yeah, exactly, especially as all my family is from Cuba and my Grand Ma, they practice Santería. They use music to provoke certain things and to heal and that kind of stuff so that’s also in my music for sure.

x Have you already composed for a movie?

L: Maybe in the future, that’s definitely one of my goals. I got asked to compose for a movie like a year and a half back but it keeps getting postponed in terms of filming so I’m just waiting until that’ll happen and then I’ll take the opportunity for sure.

x Do you work with somebody for your visual stuff?

L: Yeah Ron, him and I work together like I come up with the concepts that I communicate to him and he has the skills to create it. When I’ll get back, I’ll be talking to him as the new album will be coming out in October, I’d like to change the whole visual stuff to match with the new album so we’ll be working on that together.

x Do you feel close to other forms of art then?

L: I consider The Soft Moon like a multimedia art project anyway so I guess I would say I’m part of that world, like art world.

x Then you plan to play in some place which are not specifically music venue? I’m thinking about the gig you played at Fotografiska Museet in Stockholm in last may

L: That was a very good show for us and that was really special. I liked that we could really express the visual elements because there was panoramic visuals and everyone was surrounded by it.

So like Museum, yeah we’ve been talking about this for a while. We want to do like a “museum tour” where everything can be like an art exhibit, I think that’d be amazing so hopefully in the future we can expand on the visual aspect of the project, and definitely make it like a multimedia sort of thing rather than just a band.

x Could you tell us about your label Captured Tracks and other labels that you like?

L: It’s interesting and I think about that a lot. I feel a little bit different, as a band, as a project, in terms of the rest of the roster. And so far it’s been good, it’s worked out. And with Mike Sniper, we’re good friends and we talk all the time. When I’m in New York, I stay on his couch!

Then for other labels definitely Factory, old 4AD, Beggars Banquet. 99 Records from New York with bands like Liquid Liquid, a band I like a lot.

L: Definitely different than most of what’s happening in San Francisco. It kind of has some sort of a history and a sound within itself and a lot of people playing into that. I’m kind of the “asshole” from there (laughs). But originally I’m from LA so maybe it makes more sense as this is where I grew up.

x Despite your differences, do you still like the music there (in SF)? (like Thee Oh Sees, etc…) ?

L : Oh yeah of course I do love what’s happening musically in SF, so I’m more of the bastard, instead of the asshole (laughs). 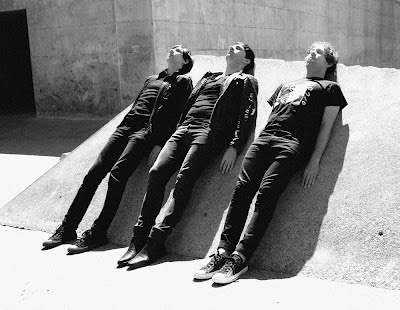