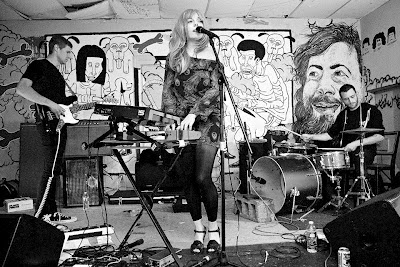 
HAPPY NEW YEAR is Eleanor Logan. She’s born in Brisbane, Australia, but she who moved to NYC a while ago. It’s also been a while now that she has been offering us her touching and passionate musical universe with hypnotizing songs and her bewitching voice through a melodic fog with some distorted sound.

She’s currently on tour and will play some gigs in France, like next Wednesday (11th of April) at Fake Series festival by Hartzine at L’Espace B. She’ll also release her first LP on Parisian label SVN SNS RCRDS.
She kindly found some time to answer a few questions:

“Right now I'm just outside of Jackson, on an East Coast tour of the U.S.A. with the guys currently playing in HAPPY NEW YEAR, Dan Derr and Thomas Martin. We're driving over a flooding swamp in Mississippi. There's a tornado warning on the radio, but we're driving away from the storm so we'll be okay.”

x Definition of rock and roll and/or music:

Rock and Roll is a style of music. Music is emotions and stories converted into a universal language. 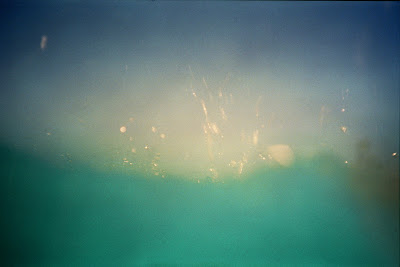 I took this photo with a waterproof disposable camera in Byron Bay, Australia. It feels like the moment when you come out of the water and open your eyes.

I have sleep paralyzation dreams where my mind is awake but my body's asleep and I just can't wake my body up. I hallucinate that I've fallen out of my body and am crashing into things. It's terrifying, but when I think about it later, I love that it exists. It's such an intense feeling, and it's only brought on by the mind.

I spend a lot of time alone in my practice space studio. It's in a huge deserted brewery that was built in 1850, then was empty for a really long time. We were the first to move in after that, so we chose an amazing room up high with huge windows looking over Brooklyn. The walk to it through the giant empty building was like walking into a horror film, streams of dusty light through broken windows, and birds swooping on you from inside. The building's more populated now, but it's still creepy late at night.

- The Cure - Live at the Town & Country Club, London.
This is a VHS video, not an album, but I watched it on repeat when I was young. I taught myself bass by playing along to the whole video, over and over.

- Liars - Drum's Not Dead.
The summer I moved to Brooklyn I had a tiny mp3 player that ran on AA batteries and could only fit 1 album at a time. I kept this on it for months and only listened on the subway. I rode the same train every day, and there was a guy who also rode the same train, every day. And we'd stare at each other, every day for months, but we never talked. Then one day I saw him leave the train, stand still, wait for all the people to walk by, bend down and pick up a bag of weed from the ground and put it in his pocket.

“If I had a wish, I'd wish for two wishes. One would be that Cairns is still alive, and one would be that I would be a really good singer, like Aaaaah”. I walked past a 4 year old girl in Manhattan and this is what she was saying to her Mum. The aaaaah part was this operatic high note that was just perfect.