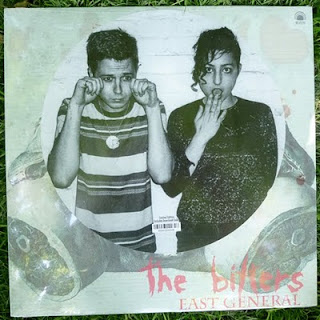 Hey,
Ben and I both answered most of the questions, and then split up the rest of them.
Love from Toronto,
Aerin
xo

Foggy Girls Club: Here are the questions:
x What is the story of The Bitters ? The meeting between you both ( love story ?)... and who’s doing what?

Ben: Well Aerins brother dated my sister which lead me to start hanging out with Aerins brother, but then Aerins sister got involved with me (love stylez) and we had a thing going for a minute, but then Aerins mum (Gwen) didn't approve so I had to approach things differently by starting a band with Aerin because its the only way I ever get to see her sister. I love her so much. Angel Fogel, I love you.

Aerin: Our name came out of the bitter blood that got created in the messy situation. That's all gone now though, and my sister is on to her current love, Murphy. He's more her type. Anyways, Ben plays guitar and I play drums.


x How was your teenage life ?, What were your dreams when you were kids?

B: My teenage life was awesome. I had a shitload of acne and I slept a lot, and called my mum a "bitch" every day. My dream when I was a kid was to be a pro baseball player, but then I lost 2 of my fingers in shop class so that meant no more baseball and not as many video games, so i turned to music.

A: My teenage life was full of angst and medicinal-grade pot that I smoked for free off my high-school sweetheart's bandmates. It was also full of too much eye-liner and decade-old grunge albums and ketchup chips. I also owned 4 Maine Coon cats that were left in my bushes by the black magic working old man next door, and these cats all died within two days of each other for inexplicable reasons. Needless to say, I suffered through a deep depression in the latter years of my high school career, despite being surrounded by art school indie nerds who spent their lunches making elaborate murals on each others' backs with body paint and biodegradable sparkles.

x What did music change for yourself, in your life ?

A: Playing music reminds me to drink a lot of water all the time.
B: I started to sing in the shower a lot more, and generally have nicer days.


x Your name is link to your sound, it’s bitter, isn’t it? Why did you chose this kind of sound ? like brut, tuff, dirty, flanger….?

B: We chose the Flanger brut sound and took music this way because we wanted to actually get in there and really fuck the music, ya know? Fuck it up all day and then do it again.

A: I bought Ben a Flanger pedal for his 12th birthday when he broke 2 of his fingers.


x We grew up (thanks to our parents) in rock music from 60,s, 70s, 80’s etc… a music which was always linked to others art (like arty). What are your link with others arts?

A: I write novels for my friends to allow them an escape from their everyday realities.
B: I kind of grew up in music, but I also grew up in cinema and also inside books.


x How do you think your music is universal?
I get up every morning, eat some oats and just THINK IT. 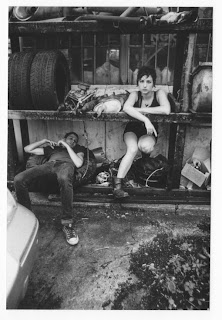 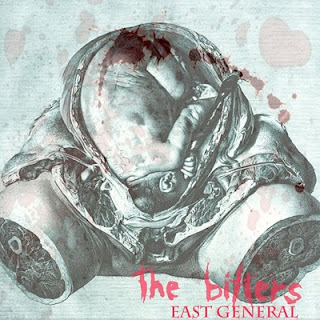 x What about your first LP? East General, what is the cover? (baby/foetus in a mutilated body)? and why Mexican Summer?

The cover was done by our friend Dona who is a rich chick from the middle east and she owns the soccer club West Ham United. She stole the image from a black metal band, according to some fruitario at pitchfork. Seriously though, the image rules and it suits the record as East General is where Aerin and I both had our first babies.
We chose Mexican Summer because that fat shit Rick Rubin wouldn't sign us.


x Can we say, there is « canadian rock music scene » or are you considering yourselves as kind of american or english speaking scene ?
A: I'm American anyways. There is no rock music in Canada.


x What are the next plans? any gig in France?
I think we are playing Eurokenesse soon.


x What music/art do you know from France?
B: I know all about 1960's ageist lover shit, and the band DATA ROCK. My favourite book is STORY OF O (true fact).
A: Levinas, Sartre, Foucault

B: Some pre teen from Les Miserables. I was also a pre teen then.

Costco and the Toronto Coffee Conspiracy. 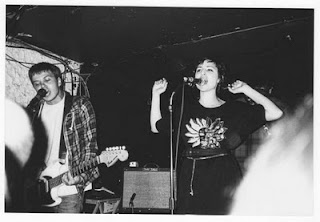